The Cost of a Good Old-fashioned Butt Kickin!

What does a good old-fashioned butt* kickin’ cost?

By cost, I mean to ask, is the lesson more expensive than the learn?

And what I mean by butt kicking is when we are schooled by someone who was better than us at whatever we were engaged in with said better. Something we may or may not have known going in. Possibly something where we were in over our head.

What I don’t mean by old-fashioned butt kicking is anything related to a traumatic experience. Traumatic events have an entirely different cost; a cost which I cannot presume to measure nor do I intend to minimize. For tonight’s post, this is not that.

What this regards is what we might encounter in sporting events, card games, cook-offs, a friendly (or not so friendly) debate, and the like. Whatever the case, we were not the expert in the room. Not by a long shot.

For me the list is long. I’ll give you the shortened version: chess, golf, cribbage, water skiing, anything which involved linear thinking, and attending a 3-day college basketball reffing clinic (whew, was that ever humbling). These and more can be found circled in red on the lower end of many of my learning curves.

Let me share one from above where I was schooled; the aforementioned basketball clinic.

First, an aside: I believe I am pretty capable at learning new things. It’s kind of a double edged sword, though; it can work for me and it can work against me. I am successful at enough of the things I try so occasionally I find myself trying things that are probably better left alone. Take skydiving, for example. I figured, what could go wrong, right?  Nothing did, of course, or no blog tonight, but what if? But I seldom ask either of those questions; what could go wrong?, and what if?. Instead, I ask what could go right?

That’s the mindset I had when I signed up for the college basketball reffing clinic. I had reffed high school basketball for several years and figured I was pretty good at it. So I asked myself, what could go right if I attended this clinic. My vision of things going right focused on my being noticed right away and subsequently being asked (begged) to work my way up to big time college reffing. I invited my daughter along for company because she too was a basketball official. She worked high school games while enrolled in her freshman year of college.

Fast forward to the third and final day of the clinic. I was finishing up my last game in front of the substantial crowd made up of parents of the players and interlaced (I hoped) with scouts looking for college-ready refs. During the game I made several calls. One player, number 34, was the recipient of more than her share of my whistle than the others players. It happens.

On one occasion, I called her for blocking and immediately a strong voiced gentleman boomed from his balcony seat, “Get into position, 34!”, clearly referencing her number. Later she fouled a shooter. “34, You’re horrible!”, yelled the voice again. I felt sorry for her. It seemed extreme for this fan to be harassing her for normal basketball play, but you get all types.

This continued throughout the game—the same strong voice unabashedly critiquing number 34. Finally, mercifully, the game ended. The players left the court and the fans had exited the arena. All was quiet as I headed over to my gear bag to change out my stripes for a comfy sweatshirt. To my surprise I heard the disgruntled fan one last time as he left the balcony, “Hey, number 34, you are terrible!”

I thought, Seriously? Let it go. She’s in the locker room.

It was then, when I took of my striped shirt, that I figured it out. Pinned to the back of my shirt was my reffing number—so the many scouts could identify me. None did, by the way. However, my number was not missed by the man in the balcony. You guessed it! I was wearing number 34.

What could go right? Not much in this case. To return to the vernacular, I received an old fashioned butt kicking. I was schooled by better officials and by a fan who actually happened to be right. Who knew? He used the word terrible. I prefer to use in over my head. But, to be honest, this is a distinction without a difference.

So, back to the original question: Is the lesson more expensive than the learn?

There was a cost to my lesson, both a monetary and a personal cost: It cost me money to travel and to attend. It also dipped in to my pride and exposed the reality of my reffing talent. That was the cost of my lesson.

And the cool thing about the learn is that, while the cost of the lesson was uncomfortable, it was also temporary. On the other hand, what it bought me, the learn, is lifelong.

So back to you. I invite you to consider when one of your lessons turned into a learn. What was the event? What was the cost? What lifelong learn did it buy you?

Thank you for reading. Feel free to submit a comment online or to respond via teachfearlessly@gmail.com.

*Toned down to PG for this blog and inspired by my deep thinking nephew, Michael, who told me at the end of a conversation, “ I gotta sign off. I am heading out to get my *ss kicked by my Jui Jitsu coach.” He knew he was going to get schooled, but he also knew he would come away having learned something new.
Posted by LoveFearlessly at 10:19 PM 2 comments: Links to this post

And the Wall Came Tumbling Down

That which we do not understand can be explored with curiosity and compassion or hidden behind a wall of fear and judgment.

Posted by LoveFearlessly at 5:30 PM No comments: Links to this post

Which Pebbles Do I Keep?

Which Pebbles Do I Keep? 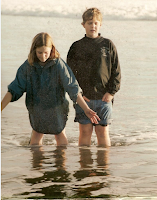 Okay, let’s play an imagination game. If this was an audible post, I’d say, “Now, close your eyes.” But, of course, that wouldn’t work, so, please, join me by closing your figurative eyes and let’s collect some pebbles.

Imagine you are standing shin deep in a beautifully clear stream. It’s cool yet inviting. You look down; your feet look a touch bigger than normal. They’d look weird if you weren’t so used to wading in this brook, but by now you’ve grown accustomed to seeing your enlarged feet dancing in the water’s distortion. In your brook, you also see pebbles upon pebbles upon pebbles, differing in shapes, sizes, and colors, and mostly smooth due to the gentle caress of nature and time.

With your gaze turned downward, find that special pebble that catches your eye. Reach in, pick it up. Hold it in your hand. Now run your fingertips gently over it as it floats in your hand. Calming, isn’t it? If you brought a bag, drop the pebble in the bag. If not, a pocket will do.

Your pace and style of pebble gathering will be uniquely yours. Occasionally, someone will join in and offer you one or two of theirs. At some point, your pockets will be full and you’ll return to eagerly spread out your pebbles, much like it’s Halloween night.

Imagine yourself now assessing your lifetime bounty. You might ask yourself the following questions:
Which one do I like best?
Which ones have grown on me?
Which ones don’t look so pretty now that they are out of the water?
Which ones make me want to share it with someone special?
Which ones make me ask, ‘What did I ever see in that one in the first place?’

And as we continue to roll these stones around in our hands and these questions in our heads, we pause . . . cock our head . . . and ponder:
These pebbles in our bag, could they be a metaphor of my life?
Have I been picking up pebbles all along?
Which of my pebbles has someone given to me?
What ones are still beautiful?
Which ones look entirely different now that the luster of life’s water has dried and faded from upon it?
Which ones cause me to step back from in wise reflection and wonder what I ever saw in that pebble in the first place?
Am I still sharing some of my best pebbles with others?

And finally, we are no longer imagining. Our eyes are open and we ask ourselves, which pebbles do I keep?


CHECK OUT The Bottom Turtle ~For musings from Dave on how to Love More and Judge Less link to his new book.
Posted by LoveFearlessly at 5:30 PM 1 comment: Links to this post

In Celebration of Scars

Scars are a testament to our life, demarcating the exact moment we begin to heal. They are the separation between wound and recovery. To c...